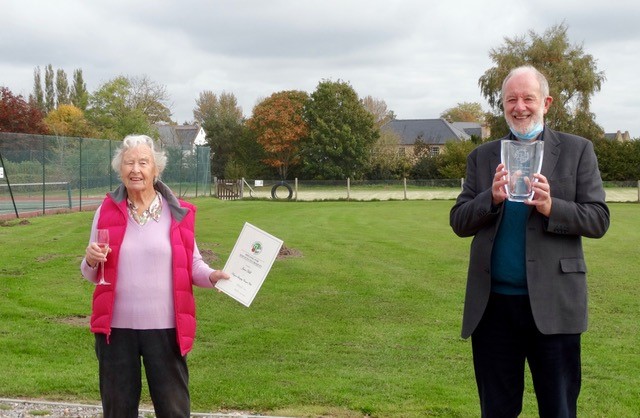 The Council of the Croquet Association has decided that Kington Langley Croquet Club’s John Grimshaw will be one of the first recipients of a new CA major award – The Bernard Neal Award for exceptional services to croquet.

John has been involved in croquet for over 40 years, starting at Bath croquet club. He later moved to Dyffryn in Wales and set up the club there.  Amongst his many achievements he spent 14 years as League Secretary of the South West Federation of Croquet clubs and has been instrumental in promoting their Short Croquet tournaments at Budleigh Salterton and Nailsea, which we attend.

Since returning to Kington Langley he has held most positions in the club, and continues amongst other things, to coach us. He was captain of our Federation team for many years, and under him, they won the Secretaries shield a few years ago.

He is still very active with us including mowing the lawns each week.

Also at the 2020 Croquet Association AGM our president Jane Hull was awarded a CA diploma.  Jane was a founder member of KLCC, and has worked tirelessly over the years for the club, including supervising the club’s expansion to two lawns in 2018. She is still active in her presidential role, as well as playing regularly.

Kington Langley Croquet Club congratulates John and Jane on their achievement, and also thanks them for all their help and work over the years.